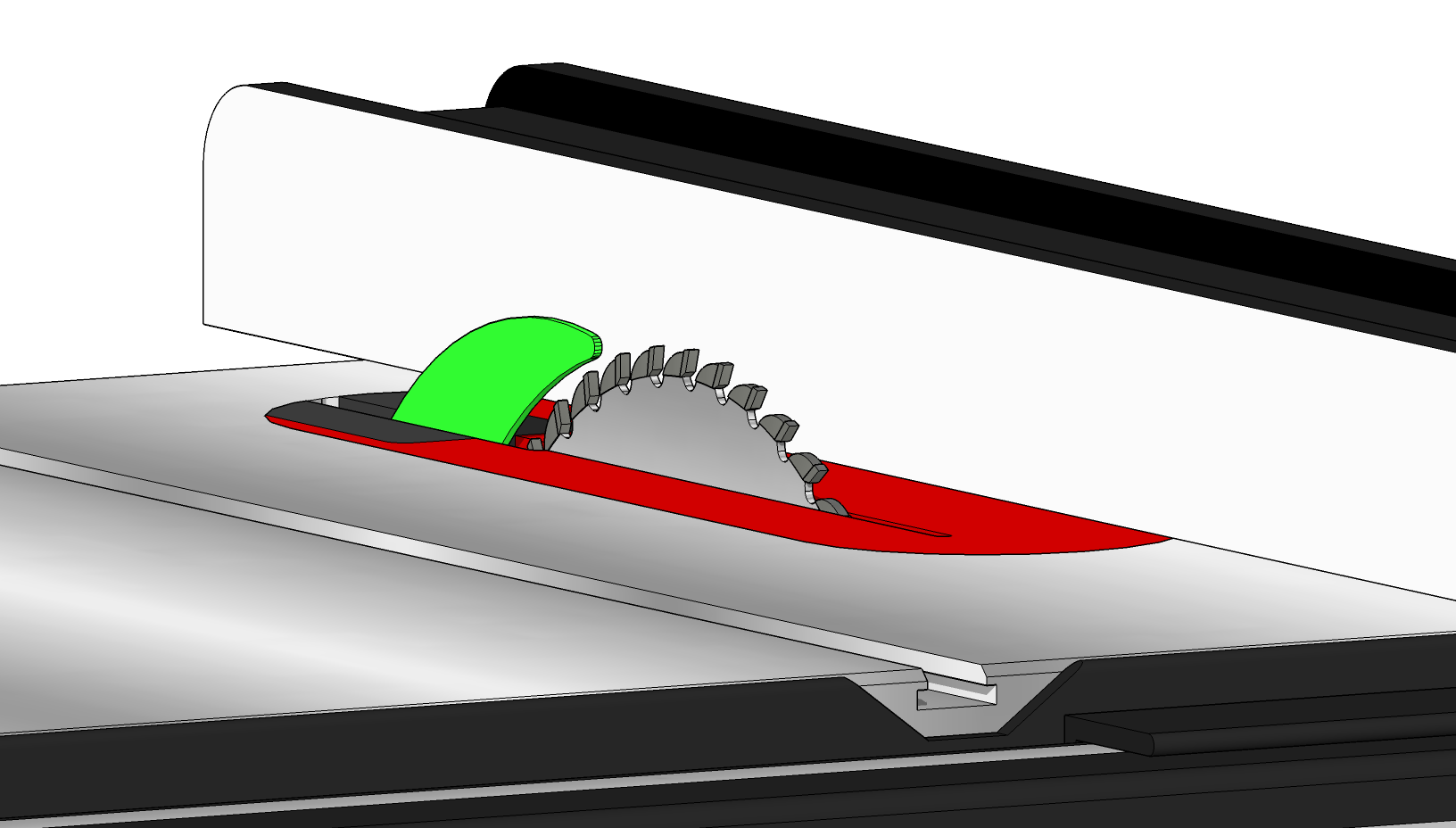 There are times when you may want to use a thin-kerf blade, but what about your riving knives and splitters? Won’t they be too wide? Well, not exactly.

We’re going to touch on the basics of thin-kerf blades, but the main point of this article is to address the issue of a riving knife or splitter causing the wood to bind after switching to the thin-kerf blade. Many people think they need a thin-kerf riving knife, but it may not come to that. Read on…

What Is a Thin-Kerf Blade?

Now, we’re not concerned with ultra thin blades, such as specialty fret-slot cutting blades. If you’re using those blades then you’re on your own to find a good splitter/riving knife solution. What we’re concerned with are the more common thin-kerf blades.

If you go to the store and ask for a thin-kerf blade, chances are they will hand you a blade that has a 3/32″ wide kerf. Most, if not all, Freud Diablo blades are thin-kerf.

Why Would I Want To Use a Thin-Kerf Blade?

There are two main reasons to use a thin-kerf blade, plus a few other uncommon but valid reasons.

This includes any saw with less than 3 HP or running on 120 volts. Once you get up to 3 HP then you will most-likely be running the saw on 230 volt power but that voltage may not always be available to you. This is commonly the situation when working on a job site doing house construction or for home hobbyists who don’t necessarily need anything other than standard 120 volt service.

For various reasons, you may find yourself using a lower horsepower saw.

Since a thin-kerf blade removes 1/4 less material than a standard kerf blade, this makes it easier for lower horsepower saws to make these cuts, especially when cutting through thicker materials.

In my mind, this is usually a silly reason to use thin-kerf blades. If you’re cutting something like ebony, where you scrape up any sawdust you make and save it, then sure, this is a valid reason. If you’re just cutting plywood or even most hardwoods then it might be time to weigh the cost savings vs. the hassles of using a thin-kerf blade.

Which brings me to…

Why Would I NOT Want To Use a Thin-Kerf Blade?

Thin-kerf blades have a tradeoff.

If you’ll forgive me a brief tangent, thin-kerf blades have been over-hyped on the internet. It’s gotten to where people who are new to woodworking are under the impression that you should always be using a thin-kerf blade because that is all anyone ever recommends.

A wobbly blade can also contribute to chipping your zero-clearance insert and maybe even nicking the edges of miter gauge or crosscut sled fences. If you’re using a SawStop, we all know how that can end.

There are stabilizer (or stiffener) discs that you can add to your thin-kerf blade to help eliminate this issue. This adds to the cost so you’ll want to keep this in mind if you are using thin-kerf blades as some sort of cost-saving measure. This also limits the depth of your cut.

2. Alignment With Riving Knife or Splitter

If you are using a riving knife or splitter (and you should be) then you may find that it is no longer aligned with the blade. This results in the wood binding as it clears the blade, which can be dangerous.

We’ll come back to this…

But I Really Want To Use A Thin-Kerf Blade!

Go ahead and use a thin-kerf blade if you’ve really got your heart set on it. Just keep in mind that, like everything in life, there are trade-offs.

The main point of this article is to address the issue of riving knives or splitters, so lets take a look at this subject.

Disclaimer: I am basing this on SawStop table saws because this is what I have access to and because they are the best-selling table saw in North America so they are most-likely what you have access to as well. If you are wanting to address this with another type of table saw, I recommend you contact the manufacturer to get their advice on the matter.

What Riving Knives are Available?

SawStop sells two different riving knives. One is 2.3 mm thick and one is 2.0 mm thick. Chances are, your saw has a 2.3 mm thick riving knife and splitter on your blade guard.

Why the change? Well, up until 2010, the riving knives and blade guard splitters were 2.0 mm but due to government regulation it was changed to the slightly wider 2.3 mm. It may not sound like a huge difference, and it really isn’t, but 0.3 mm is enough to cause a significant issue, as we’ll address shortly.

Should I Buy a 2.0 mm Riving Knife Instead?

On one condition: you never plan on using your standard blade guard.

Again, we’re talking about SawStops here, but there are three blade guard options:

The Problem With a 2.0 mm Riving Knife

If you make the switch to a 2.0 mm riving knife then the clamp that holds it will be too loose since it is set to 2.3 mm. This can be unsafe and should be fixed by tightening the riving knife clamp. This will make it too tight to hold onto the splitter for the Micro Guard or the Dust Collecting Blade Guard.

You basically have to pick one or the other: either you’re using a 2.0 mm riving knife or you’re using a blade guard. Unless you feel like adjusting the clamping pressure of your riving knife clamp every time you switch back and forth, you’re better off just staying with 2.3 mm.

A friend of mine asked if you could just put a piece of tape on the right side of the 2.0 mm riving knife as a shim. Well…yeah. Jeeze! Don’t ruin the point I’m trying to make!

Seriously, though. If you’re comfortable putting tape on the side of the 2.0 mm riving knife, go ahead, but as you’ll read next, you shouldn’t have to do that.

But Don’t I Need a 2.0 mm Riving Knife If I’m Using a Thin-Kerf Blade?

For the next few pictures, I’ve created a 3D model of the saw with a riving knife that I’ve colored green for clarity.

This means that even the widest of the two riving knives is still thinner than a thin-kerf blade.

Now, if you are considering switching to a thinner riving knife, I assume it’s because you are experiencing problems. Let’s take a look at the REAL issue here…

But The Wood Is Binding Up When I Use a 2.3 mm Riving Knife!

Of course it is, but it’s not happening for the reason you think.

The thing about left-tilt saws is that the blade mounts onto the arbor shaft from the right. This means that the left side of the blade is constant. It never changes. All of the change happens to the right, which is where we usually have the fence.

To actually fix this issue, you should slide the riving knife 1/64″ to the left. Your saw may be different, but here’s how to adjust this on a SawStop.

Tip: Since you have to come at these bolts at an angle, use a ball-end allen wrench, such as the one provided with your saw that you would normally use to adjust the spacing between the brake and blade.

As you can see, there isn’t any real reason you would need to get a 2.0 mm riving knife, even when using thin-kerf blades. I feel that it’s always best to address the real problem rather than look for an easy workaround.

I hope this has been helpful. If you feel like I should add anything, please feel free to leave a comment below. Also, I encourage you to share this article with anyone who is considering using thin-kerf blades with their table saw.