Workbench: Part 2 – Gluing up the top

This is a continuation of Workbench Part 1 – Milling down some 2 x 4s.

We got another snow day so this gave me an opportunity to work some more on my wife’s workbench.

Now that the boards have all been milled down, it’s time to start gluing them together.

For this project, I knew I was going to need a few sets of cauls.  If you are unfamiliar with a clamping caul, read on…

A clamping caul is simply a set of boards that are used to keep the top and bottom of a wide glue-up relatively flat.  Their use will make sense at the end of this article.  They are extremely easy to make.  I made two sets for this glue up.  I started with some 1 X 3 stock that I cut down to be a few inches longer than the width of the final glue up. 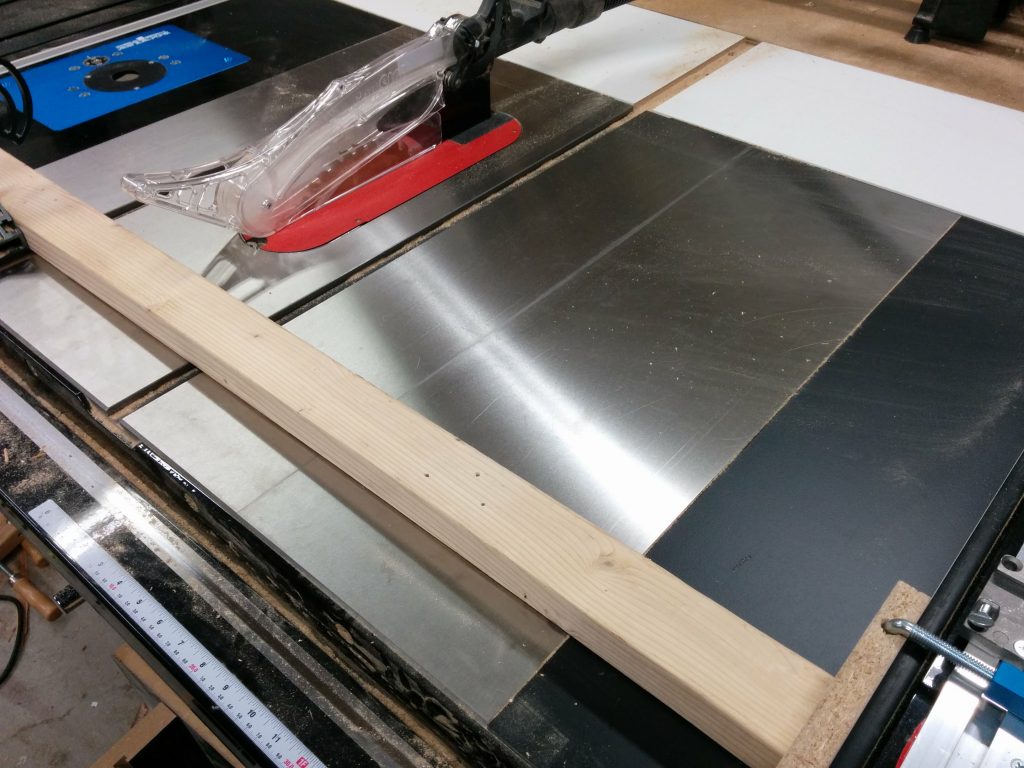 The benchtop I am making is going to be 24″ deep so I made my cauls about 28″ long.  There’s no need to be exact, just make it a bit longer than the final glue up. 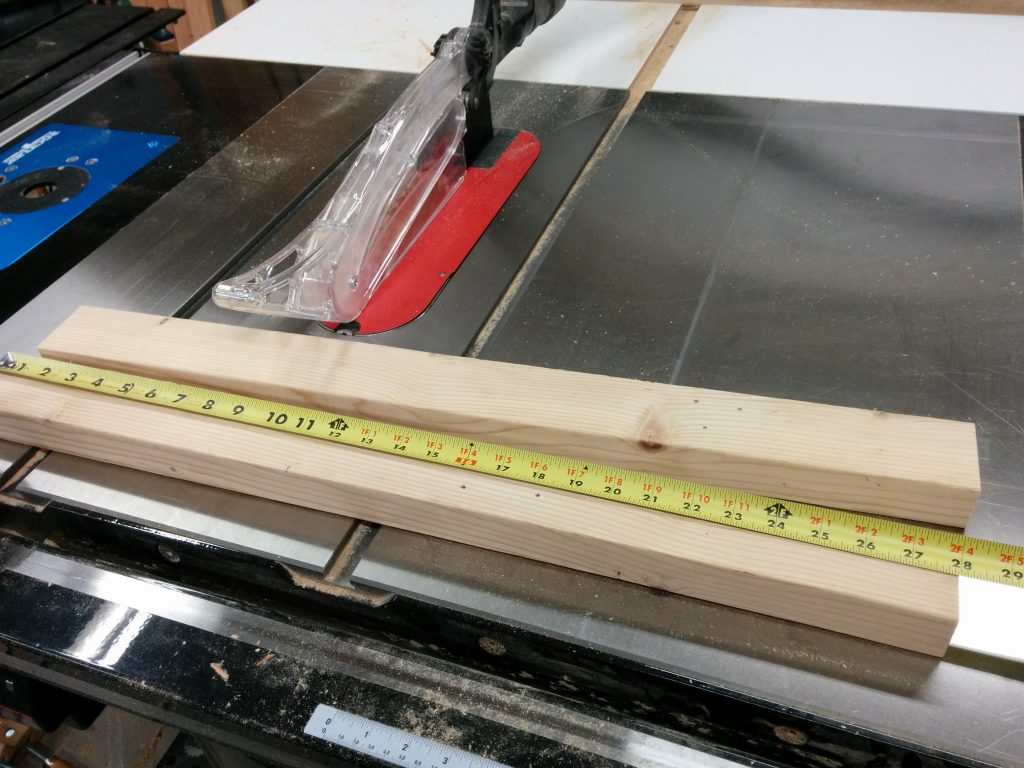 The boards have been cut to 28″ long.

After cutting four pieces that are 28″ long, I took them to my oscillating belt sander.  This step is optional but I find it really helps.  What you want to do is add a little bit of a slope at both ends of one side of each caul. 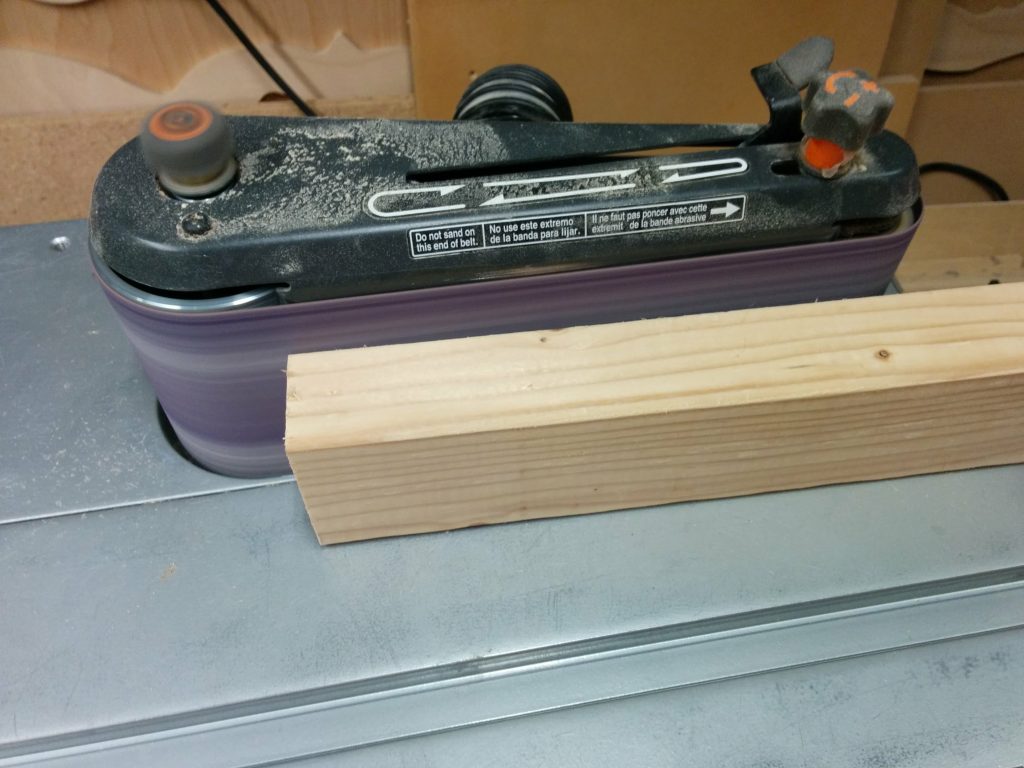 Sanding a slope at the ends.

The end goal is a set of boards that have a gap between them at the ends.  This is so when you attach them, the clamps will pull them together but it won’t bow up in the middle. 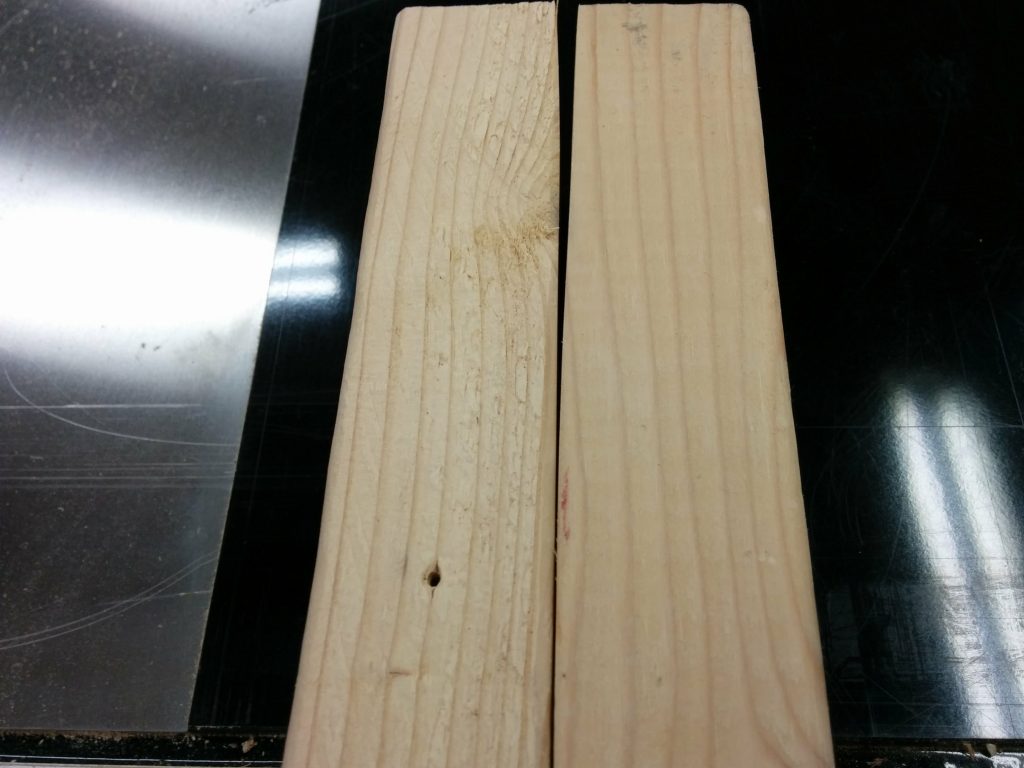 The gaps at the ends of the cauls.

After I shaped them with the sander, I covered them in packing tape so the glue won’t stick to them. 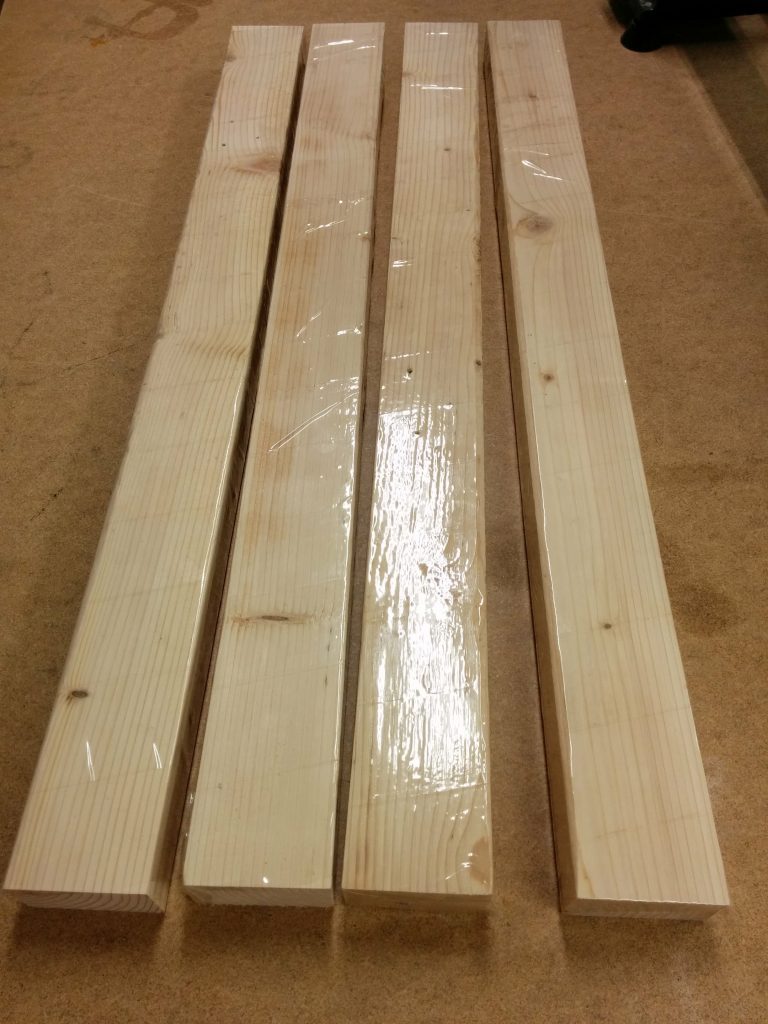 Packing tape applied to the cauls.

Now, time to work on the actual benchtop.  First I laid the milled boards out how they will be glued together. 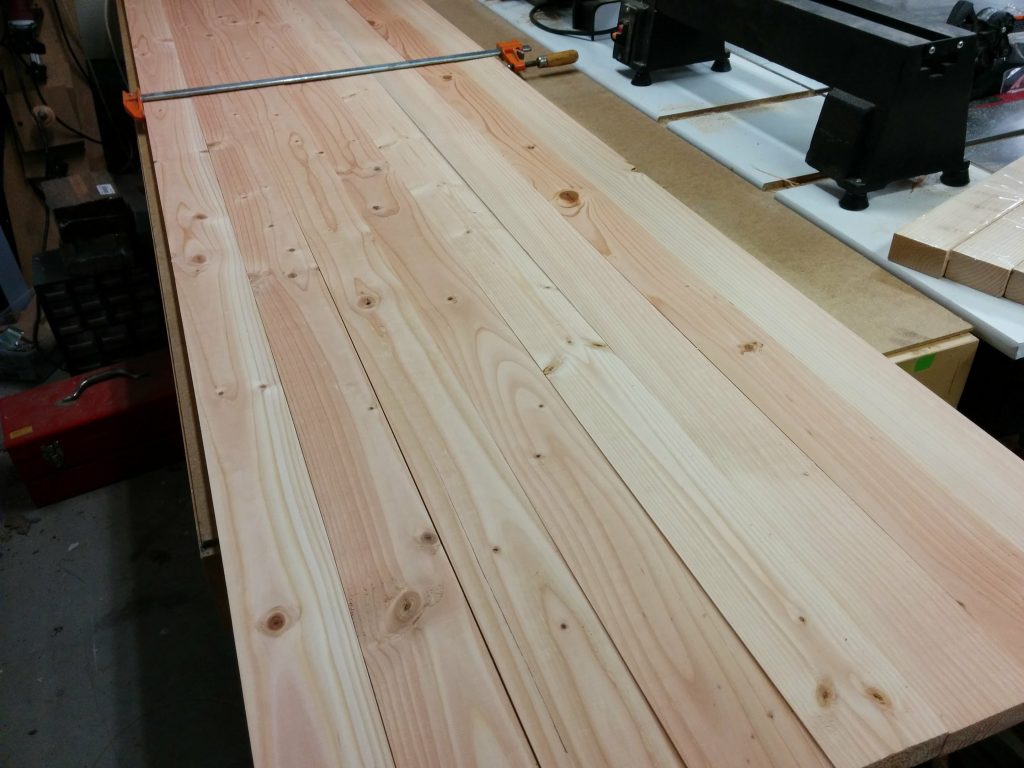 I am going to be using biscuits to align everything so I put little pieces of painters tape on the edges of the boards where I was planning on putting the biscuits. 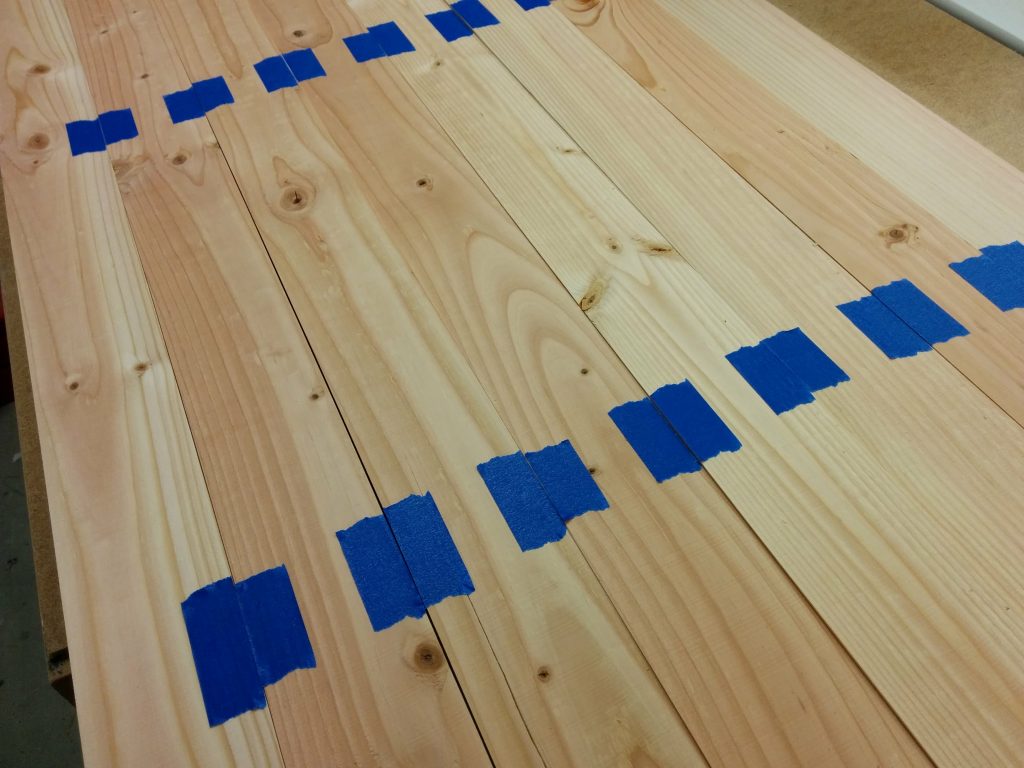 Tape applied to the boards.

Afterward, I made marks where I should center the slot for the biscuits.  The placement here isn’t critical. 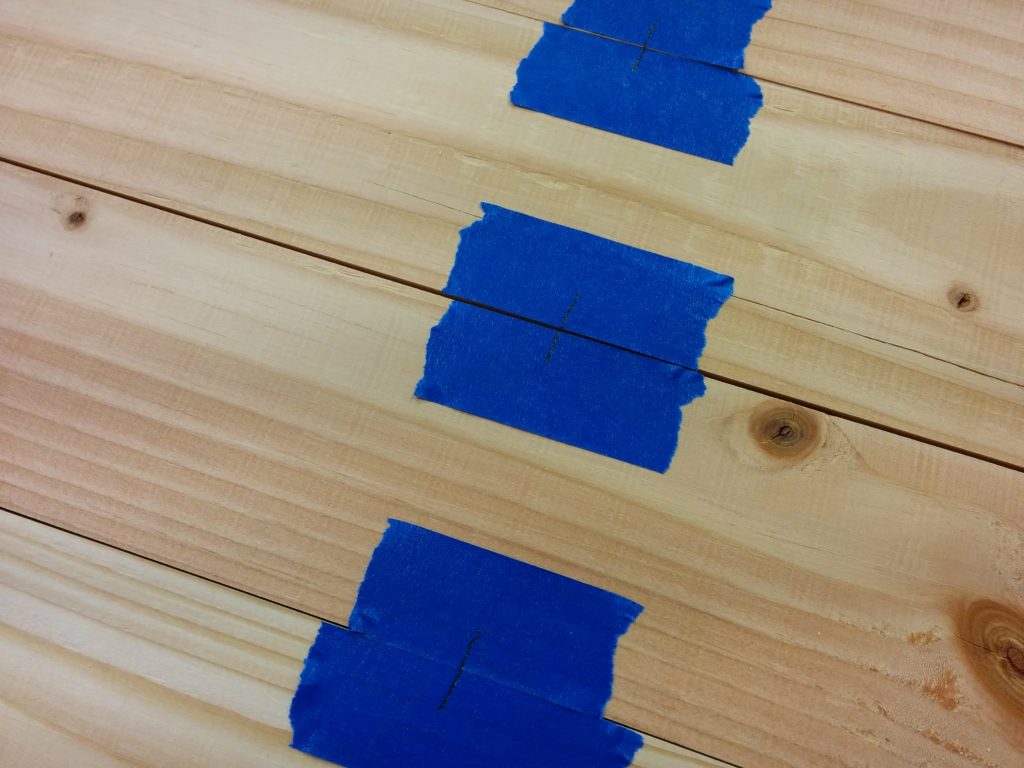 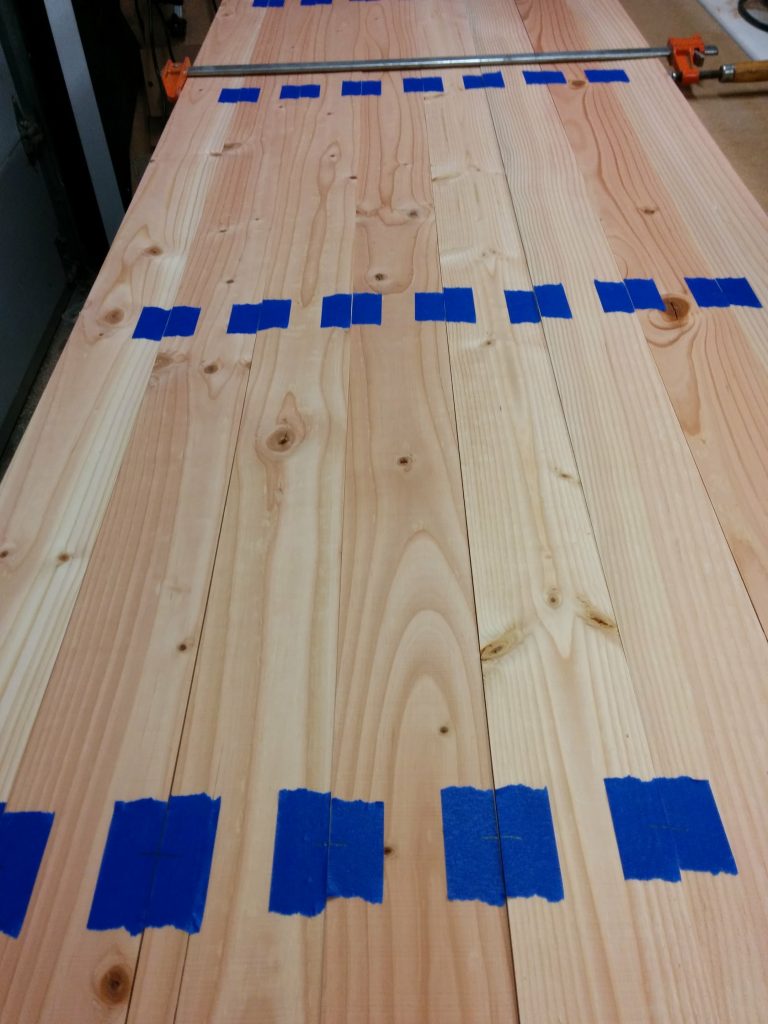 Next I added some tape so I could number each board.  The reason I’m doing this with tape rather than just writing directly on the boards is because these boards are douglas fir and are pretty soft.  I didn’t want to make indentations from a pencil on them if I could avoid it. 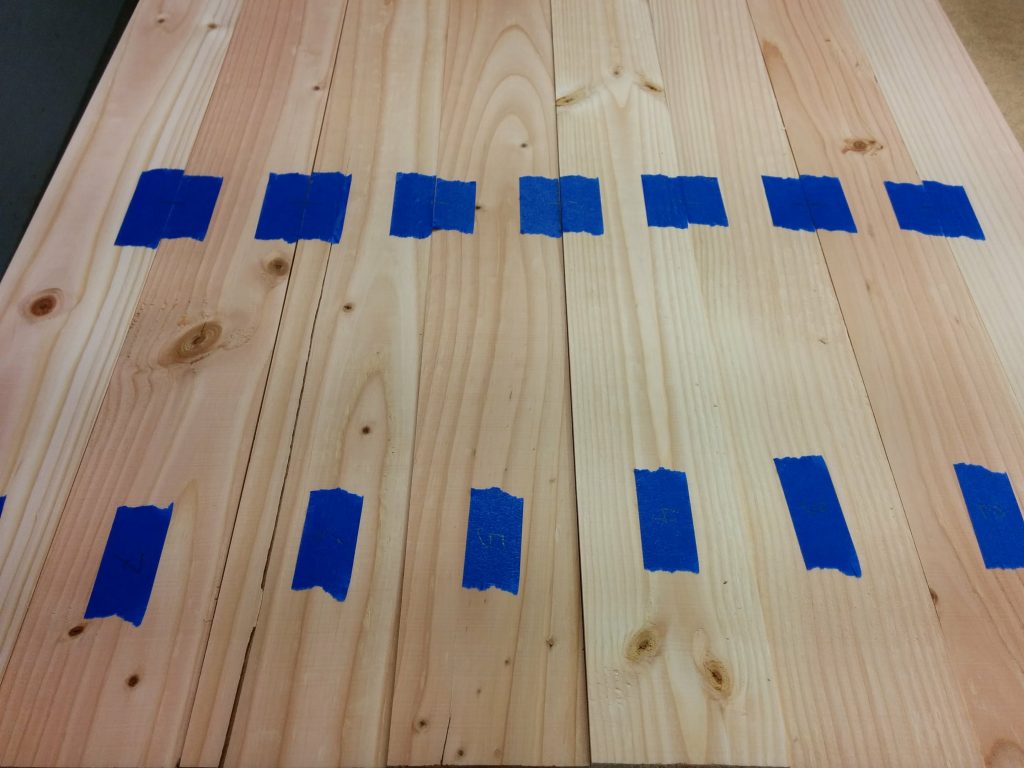 The boards are all numbered and in order

Using the marks I had drawn, I used my biscuit joiner to make slots at all of the marks. 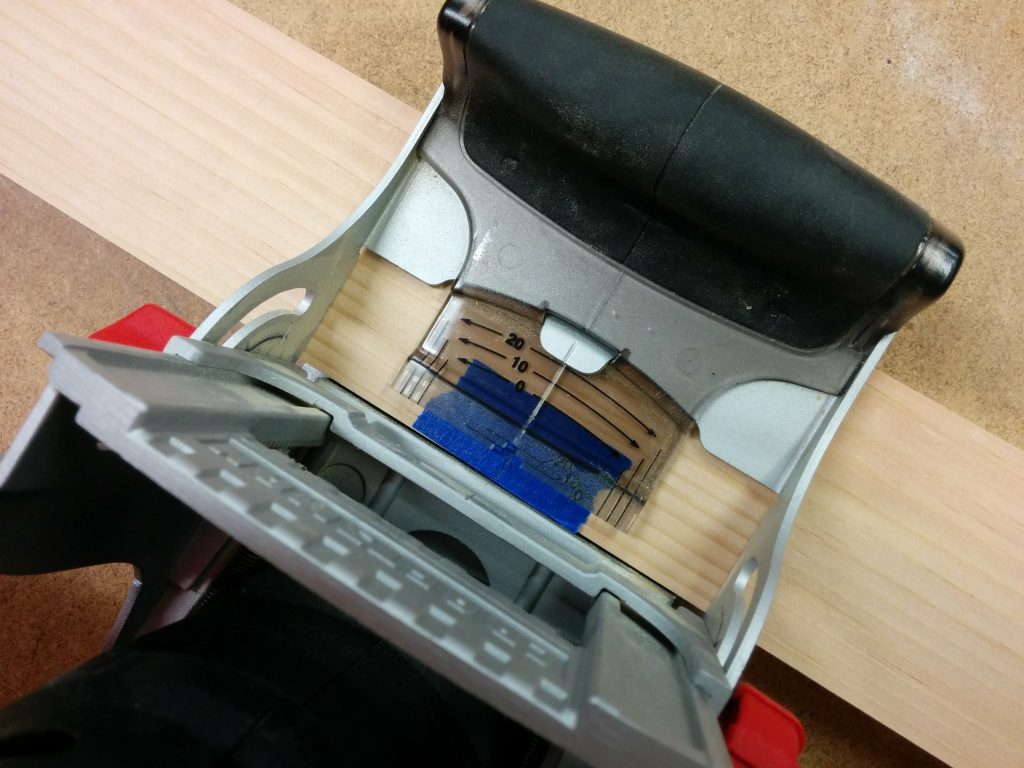 Lining up the biscuit joiner to cut the slot on the mark. 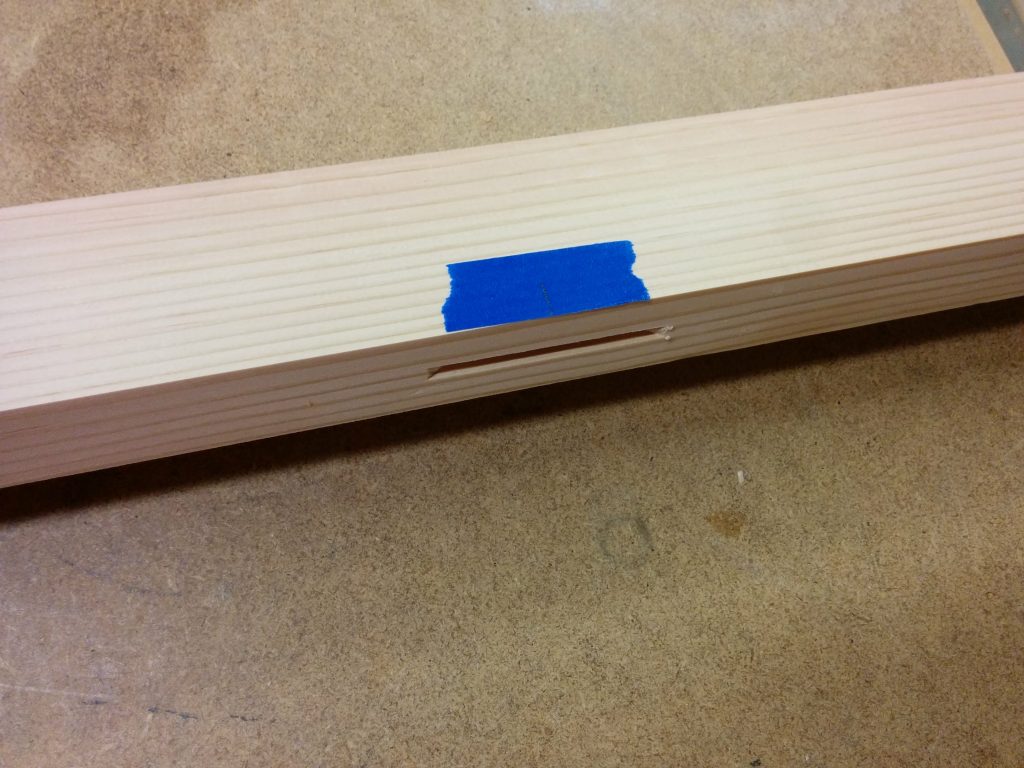 One of the biscuit slots. 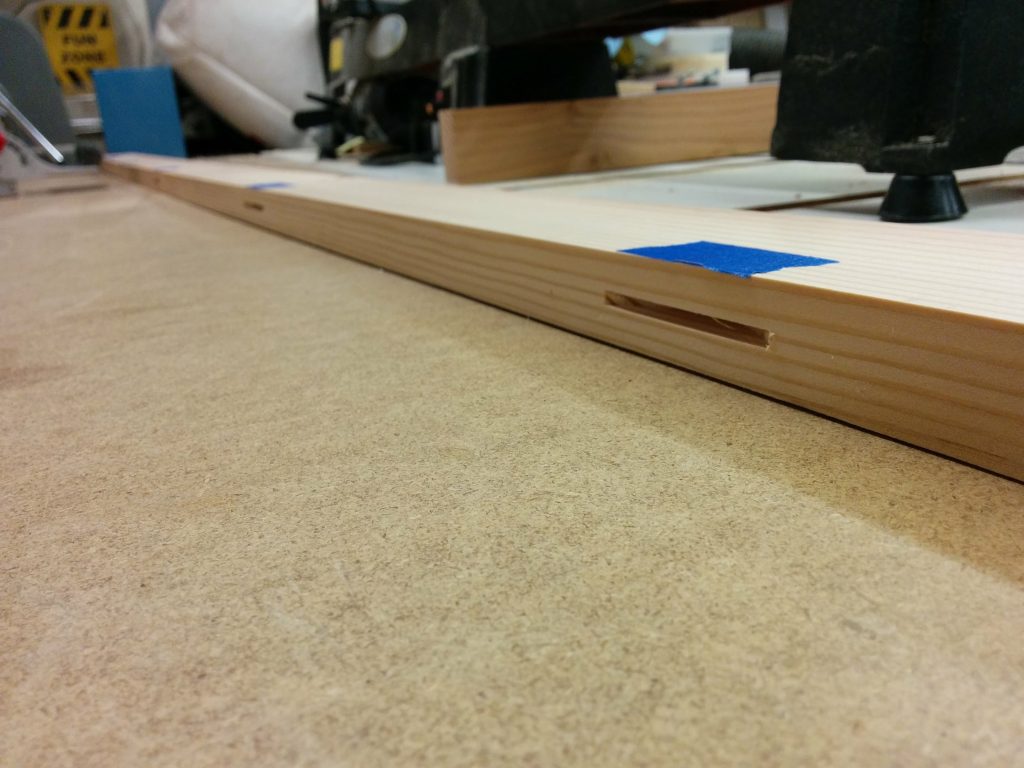 Biscuit slots cut into one of the edges.

Now it’s time to try gluing this all together.  I decided to do this in sections, gluing up half at a time.  Setting up a few pipe clamps, I arranged the boards up so I could glue up four of the eight boards. 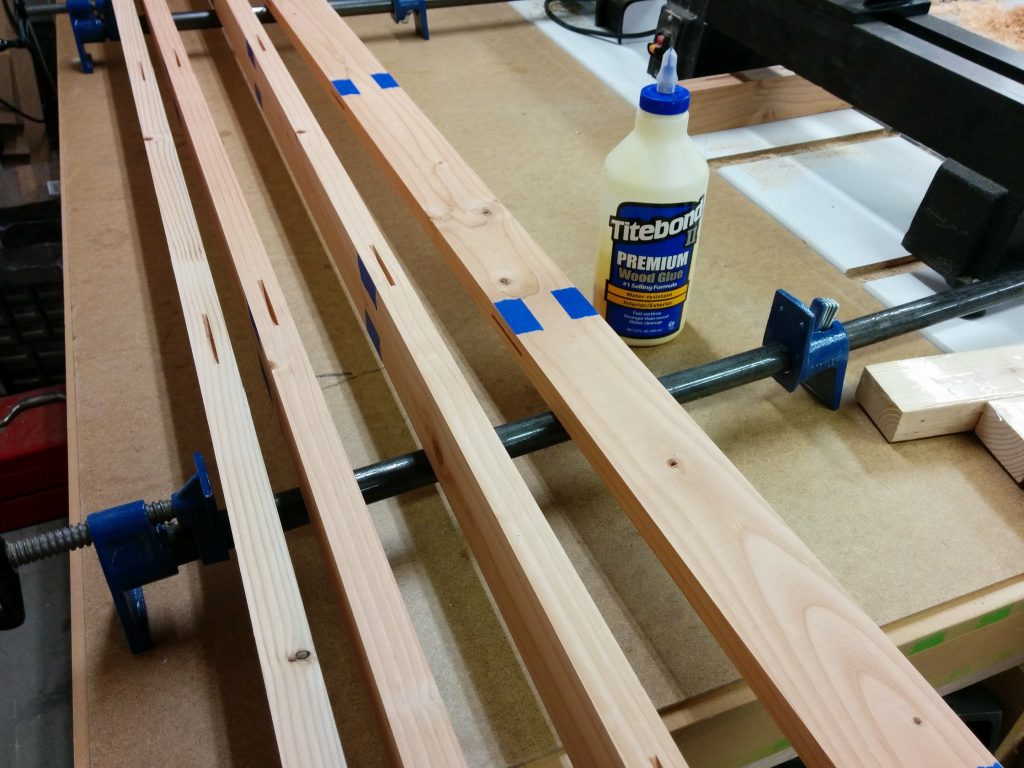 The boards are arranged so that the glue can be applied.

I applied a liberal amount of glue to the edges of three of the boards, including some extra glue in the biscuit slots.  Then I inserted a size 10 biscuit in each slot on the three boards with glue applied. 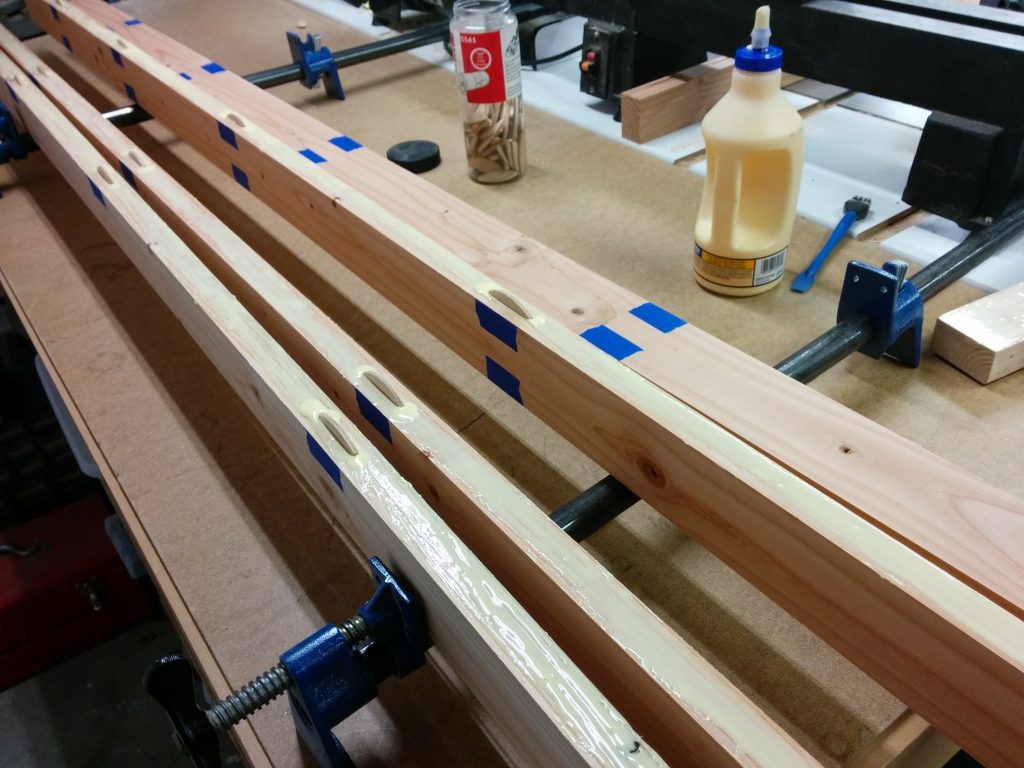 The biscuits are in place after the glue was applied to three of the edges.

Then I carefully rotated the second, third, and fourth board and inserted some glue in those biscuit slots.  After that, I laid the boards out on the clamps so the biscuits inserted into the slots on the adjacent board and started to bring the clamps together.  I didn’t really tighten them that much since I needed to nudge a few of the boards with a rubber mallet to get the marks on the tape to line up again.

I got them all aligned and started to tighten up the clamps. 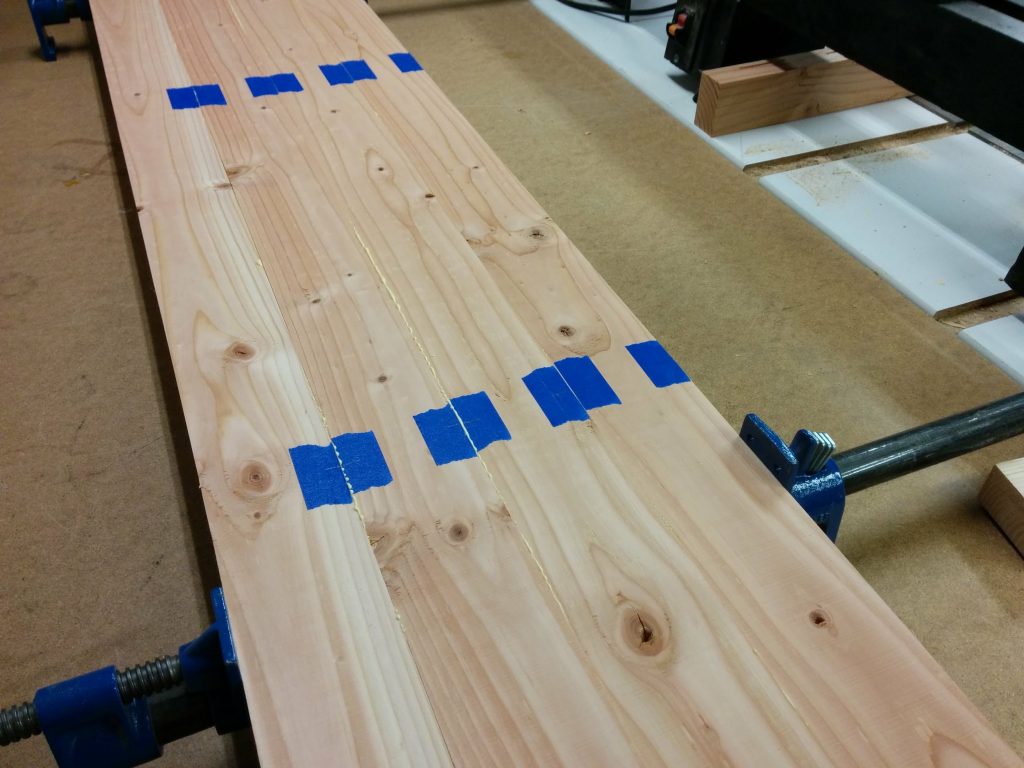 The glued up pieces being aligned to the marks on the tape.

Now it’s time to attach the cauls.  I started by sliding one of the cauls under the glued up boards.  The side of the caul that I sanded the slope onto is facing up. 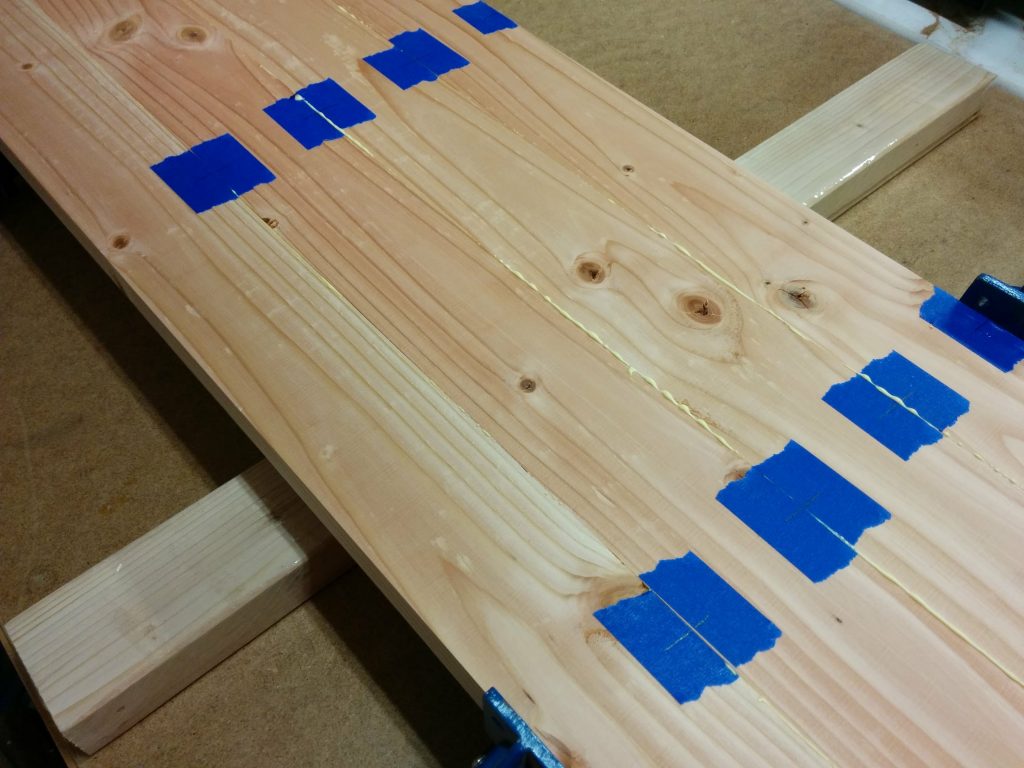 The bottom part of the caul set in place.

Then I set another caul on top of the glue up with the sloped edge facing down. 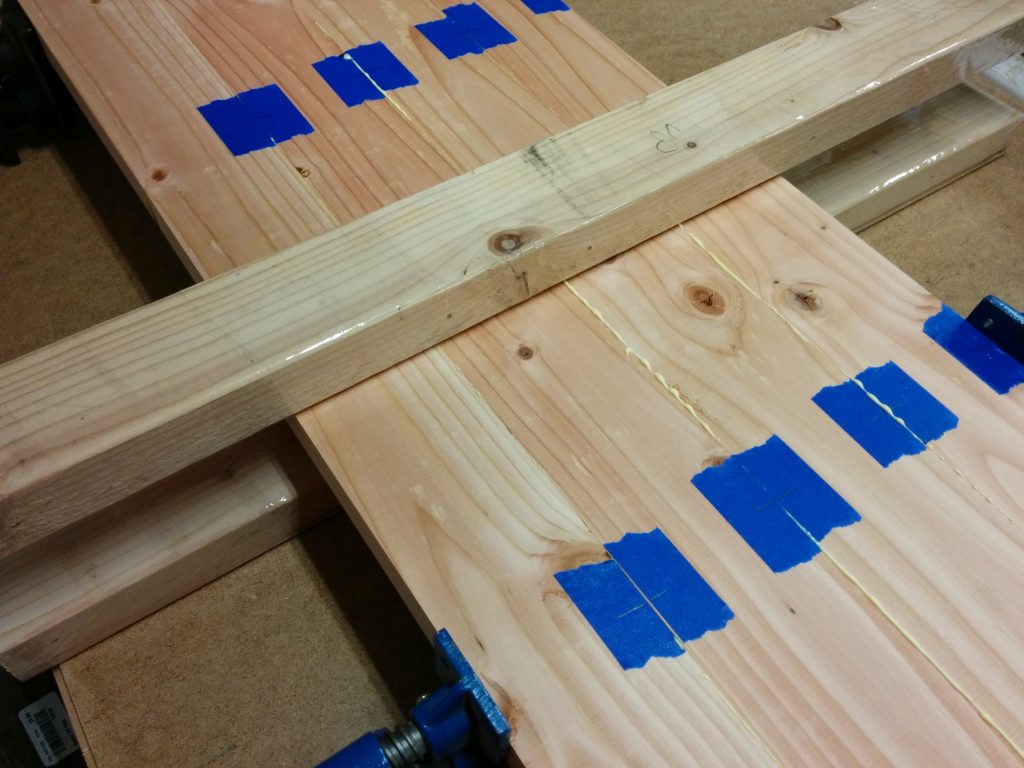 Setting the top of the caul in place.

Then I clamped them together.  The slopes on the edges allows the cauls to bend as they “give” a little bit but will direct most of that deformity to the edges of the cauls instead of raising up off the glue up in the middle. 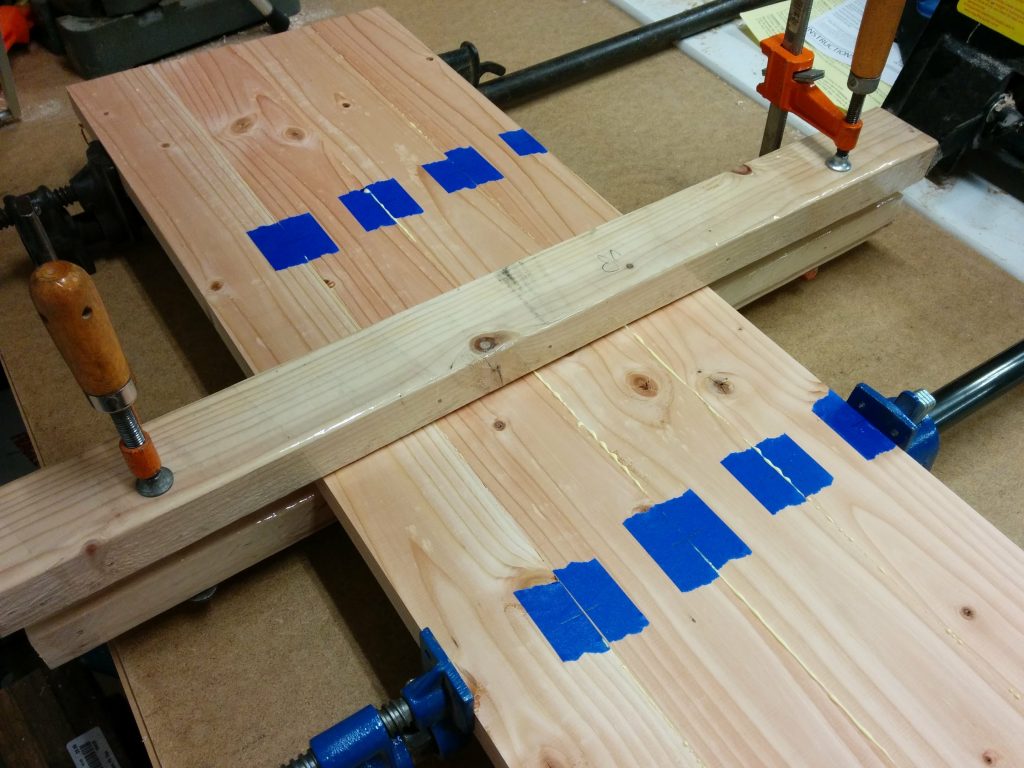 Both parts of the caul clamped together.

I attached the second set of cauls at the other end along with a few more clamps. 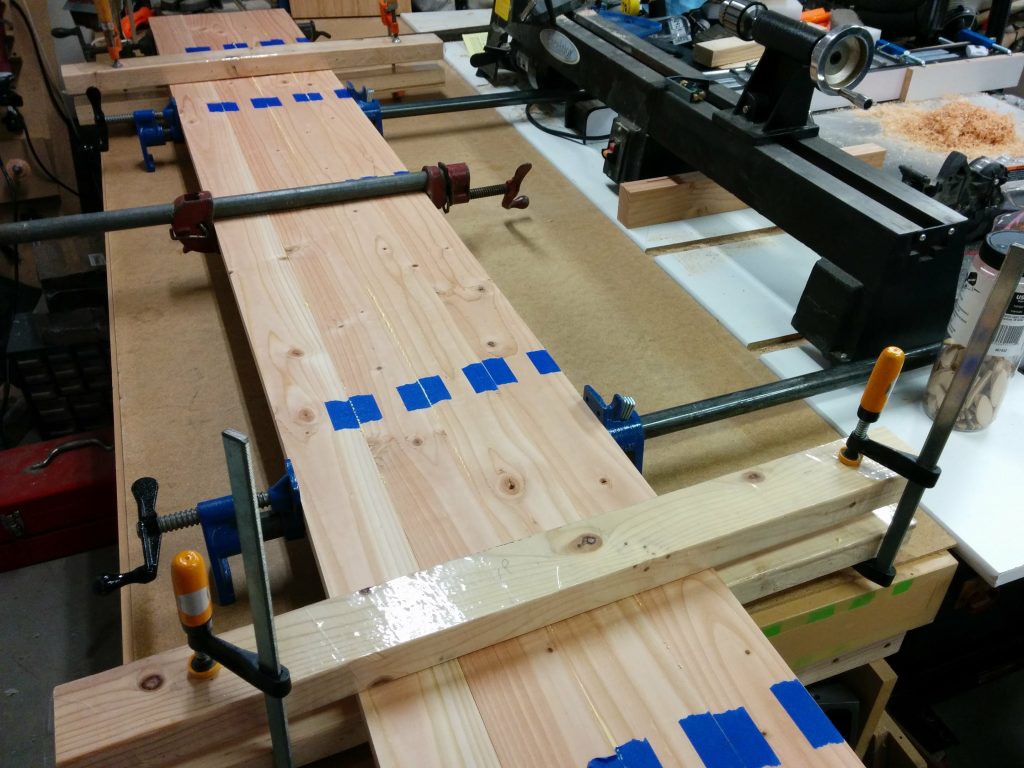 The second caul attached near the other end.

After this sets up, I’ll do the same to the other half.  That’s going to have to wait until another day.

Up next: Workbench Part 3 – Change of plans.

Making a guitar pick from a cracked ...